What are Franking Credits?

Franking Credits also known as Imputation Credits are a type of tax credit that allows Australian Companies to pass on tax paid at the company level to shareholders.  The benefits are these franking credits can be used to reduce income tax paid on dividends or potentially be received as a tax refund. If you want to learn about Franking Credits you have come to the right place.

Basically franking credits stop the double taxation of company profits as the tax paid at company level can be passed to the shareholder. Sound confusing? The diagram below should make the process clearer. 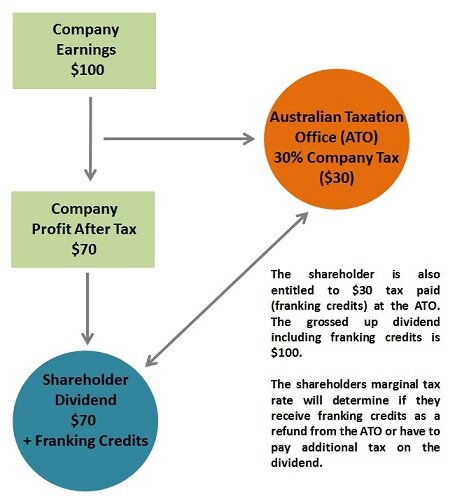 When the shareholder receives the $70 dividend they are also entitled to the $30 franking credits at the ATO.  Therefore the total assessable income or grossed up dividend is $100.  The shareholders marginal tax rate will determine if they have to pay the ATO additional tax or potentially receive franking credits back as a tax refund.

A grossed up dividend means you are also including the franking credits.  It is important you gross up dividends when comparing returns.  Although in the example above you only receive a $70 dividend you are also entitled to the $30 franking credits.  This makes the total assessable income $100.  If your tax rate is only 30% you keep the $70 and don’t have to pay tax on it as the company has already paid 30% tax on it.

In order to be eligible to receive franking credits you need to hold you shares at risk for over 45 day at risk.  This does not count the purchase and sale dates so in effect it is a 47 day holding period.

How do I know if I have to pay extra tax or receive franking credits as a refund?

Please note; we do not know your circumstances and have only provided factual information please consult your accountant or taxation adviser regarding franking credits and how the impact your taxation requirements.

Can I target shares that pay dividends and franking credits?

If you want to invest via direct shares you can certainly target shares that pay high dividends and franking credits.

Investment is outside the scope of this website and you should consult a qualified investment adviser for further information.

How can I calculate franking credits?

Site Map - Privacy Policy
Disclaimer: The information contained in this website is factual in nature and has not taken into account your personal situation. Franking Credits accepts no responsibility with regard to any financial or taxation problems as a result of using this website or any linked external websites. All care has been taken in the compilation of information however we cannot guarantee the information is up to date with the latest taxation legislation. Investors or shareholders should conduct their own due diligence and contact a qualified taxation agent and or licensed financial planner regarding their personal situations. We can not provide any advice or guidance regarding your situation. Franking Credits may be associated with or receive payments from advertisers listed on the website.